I know very well (that is, I think I know) that ‘harps’ in Hild’s time were essentially lyres, like this:

reproduction of Sutton Hoo lyre at the British Museum

However, story-wise my notions of ‘harp’ are so strong that I’ve taken the liberty of giving Anglo-Saxons gut-strung lyres, like the one above, and the British–especially the Irish–more traditional twelve-string beasties like this one from the Winchcombe Psalter: 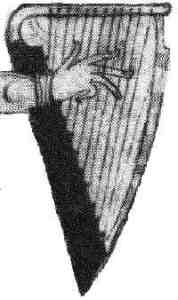 In addition, I’ve strung the British harps with bronze rather than sheep gut. Their singers are better, too. (Some cliches one simply shouldn’t mess with: Celtic harps glittering in the firelight; supple, trained voices, etc.)

To make up for their not-great harps:


I’ve given the Angles pipes and whistles (though I haven’t bothered describing them–too many things to fret about: pan pipes? antler? bone? wood? how many holes? how tuned?) and drums. The Britons would have had these, too, of course, but it’s just simpler to divide the spoils. I often wonder whether they had some kind of idiophonic, glockenspiel/marimba-type instrument: bells, wooden blocks, chimes. But this isn’t a novel about music, as such, so I elected not to chase down those details in my research. (Naturally I’m eager to hear from those who might have the info at their fingertips.)

One thing I would really like to know more about is plainchant. I know James the Deacon accompanied Paulinus to the north and spent the rest of his life there. But I’m trying to imagine what it must have been like for Hild to hear that kind of music for the first time and fall in love with its cool clarity. Right now she thinks, It was the music stars might sing. Were it water, it would turn any bird who drank of it white. But I’m prepared to accept she might just think it sucked.

Then I run into the difficulties of resonance: plainchant only works in stone buildings. So immediately I have to make the basilica at York still standing, and I have to clear it of hangings and furniture and floor rushes. I have to cover the newly dug fire pits with hard board, which makes the place really, really cold… But it’s lovely to imagine Hild standing there wreathed in her own breath, lost in the music. Then, of course, I send her back to the firelit halls of Yeavering with much meatier, rowdier music, perhaps something like this:


and, in the end, I know where my heart lies. But the heart in question is Hild’s. Lots of decisions ahead…