(This is a cross-post from my Ask Nicola blog.) 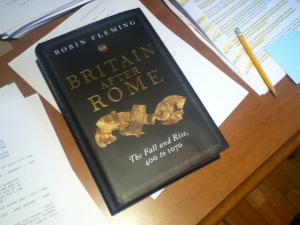 Thanks to a generous reader, I now have a copy of Robin Fleming’s Britain After Rome: The Fall and Rise, 400 to 1070. (I talk about why I wanted it so much here.) Yesterday, after lunch, before I went back to working on Hild, I flipped through it. I was struck by this statement on page 175:

Bearing in mind that Fleming’s book is largely based on material culture, I’m sorely puzzled. I don’t understand how the above inference can be drawn from archaeology. Especially as it directly contradicts Bede:

When she decided to abandon the secular life and serve God alone, she went to the province of the East Angles, whose king was her kinsman; for having renounced her home and all that she possessed, she wished if possible to travel on from there into Gaul, and to live an exile for our Lord’s sake in the monastery of Cale, so that she might the more easily attain her eternal heavenly home. For her sister Hereswith, mother of Aldwulf, King of the East Angles, was already living there as a professional nun and awaiting her eternal crown. Inspired by her example, Hilda remained in the province a full year, intending to join her overseas; but she was recalled by Bishop Aidan and was granted one hide of land on the north bank of the River Wear, where she observed the monastic rule with a handful of companions for another year.1

As I say, I was just flipping through it. It might be that there’s some explanation, some interesting archaeological trail I’m unaware of. That would be thrilling. But right now I have a sinking feeling that she’s just imagining.

Just imagining is fine. It is, after all, what I do for a living. But I’m a novelist. This book is presented as a narrative history. I have difficulty accepting that Hild learnt from her sister. In their adult lives, the two sisters follow two different religious traditions. Hereswith was either at Faramoutiers, which, though run under the Rule of Columbanus, was founded in a time and place much steeped in Roman culture (material and otherwise), or, possibly (though much later–it wasn’t founded until 658), Chelles. Both would have been under the authority of Roman Christian bishops. Hild, on the other hand, led Hartlepool and Whitby, under Bishop Aidan, who was Ionian-trained, as ‘Celtic’ a Christian as it was possible to be.

As I don’t think Hild learnt from her sister, I’m now going to worry that I have to be sceptical about all her statements regarding eras with which I have no real familiarity. (Almost everything. I know the seventh century well enough to play Jeopardy, maybe, that is, until 680, when Hild dies…)

So if anyone out there has read the book, I’d love to be reassured. I’ve been looking forward to this one!

Nicola Griffith is an English novelist living in Seattle. Now dual US/UK citizen. Author of Menewood (2023), Spear, Hild, So Lucky, and five other novels, plus a memoir. Two-time winner of the Washington State Book Award; winner of (among others) Nebula, Tiptree, and World Fantasy Awards, the Premio Italia, and six Lambda Literary Award. Runs a personal website, as well as a research blog. Also on Instagram, Facebook, LinkedIn, YouTube, and Twitter.
%d bloggers like this: