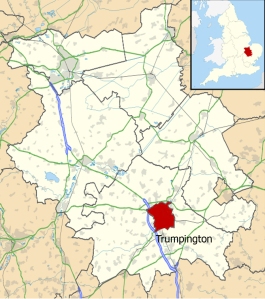 I imagine most people have heard by now that archaeologists from Cambridge’s Newnham College have discovered a previously unknown Anglo-Saxon burial site at Trumpington Meadows (on the southern city limits of Cambridge, see map), with remains dating from the mid 7th century:

The girl, aged around 16, was buried on an ornamental bed – a very limited Anglo-Saxon practice of the mid to later 7th century – with a pectoral Christian cross on her chest, that had probably been sewn onto her clothing. Fashioned from gold and intricately set with cut garnets, only the fifth of its kind ever to be found, the artefact dates this grave to the very early years of the English Church, probably between 650 and 680 AD.

This mystery woman (already dubbed by the Independent, in an otherwise very nicely detailed piece, a ‘princess’; the Guardian is more, well, guarded) was buried with three others, “an unsexed invididual in his or her twenties and two other slightly younger women.”

The find is exciting for a variety of reasons. One, it’s a high-status bed burial, which is rare. Two, the woman/girl in the bed was wearing a gold and garnet pectoral cross, which is very rare. Three, it’s possible–given the style of the cross and the sex of those buried–that this is a monastic burial, that is, an indicator of a high-status religious foundation that no one knew about until now.

But here’s a nifty video that will tell you more:

Apparently the skeletons and teeth are in relatively good shape, so my hope is that strontium analysis will follow shortly. With luck, there will also be some DNA to play with. Between the two, we might be able to learn whether the people are related and where they grew up. If we’re extraordinarily lucky we might find out if they died of plague. (The dates make it possible that they were caught up in the plague of Justinian, c. 664.) Plague would offer one explanation for the death of such young women without obvious wounds. (Sixteen is a little young for death in childbirth. Not impossible, just not, in my opinion, hugely likely.) Another possibility, of course, is malaria: Trumpington isn’t that far from the marshy goodness of the Wash.

But who might this woman have been? Well, she could have come from almost anywhere–which is why I’d love to see the strontium data. But if I had to guess (and I’m a novelist so, hey, that’s what I do) I’d say she was either a) an oblate given into the care of a foundation as a baby (note the wear on the cross) by a king of, say, East Anglia, or b) a royal daughter of one of the minor, semi-independent groups being absorbed by said East Anglians and made unavailable for marriage (and therefore alliance-building) by tucking her safely away in a church.

What interests me most about this burial is the mix of grave goods: pectoral cross and girdle gear. This makes it an early burial; in my opinion, closer to 650 than 680. It might also argue for this young woman being in the line of succession for the religious house: wearing instruments of temporal power (chatelaine), wealth (bed) and piety (gold and garnet cross).

What does all this have to do with Hild? Perhaps not much. Perhaps a great deal. Until we get more information there’s no way to know. So now I’m moving into purely speculative mode.

If these women, as suggested by the Independent, died during the first sweep of plague (c. 664), Hild would have been hosting and facilitating the Synod of Whitby even as they gasped and died. If it happened before that, it’s remotely possible that this young woman was Hild’s niece: Hild’s sister Hereswith married into the royal house of East Anglia. (In my novel I put that marriage at c. 625, though most might argue for it to be a little later.) We don’t know the name/s of Hereswith’s daughter/s, if any, but I gave her one, born in 627 and called Æthelwyn–Noble Joy. Perhaps when Hereswith left for Faramoutiers (or whatever foundation Bede meant by ‘Cale’–I don’t think Chelles had been founded), Æthelwyn had to be left behind as a hostage for good behaviour. In which case it would make perfect sense for her to be hustled into the care of the church while her brother was groomed for the throne and their mother was shunted aside by men with powerful interests.

If this young woman (let’s call her Æthelwyn; it’s as good a name as any), was a nun, it’s extremely unlikely she died as the result of childbearing. (Yes, nuns do sometimes get pregnant, but in such a case I doubt she would have been buried with full honours.) So I’m plumping for some infectious agent. The two most obvious culprits are either plague, in which case this isn’t Hild’s niece, or malaria, in which case she could be.

3 thoughts on “Hild and the 7th century princess”

Nicola Griffith is an English novelist living in Seattle. Now dual US/UK citizen. Author of Menewood (2023), Spear, Hild, So Lucky, and five other novels, plus a memoir. Two-time winner of the Washington State Book Award; winner of (among others) Nebula, Tiptree, and World Fantasy Awards, the Premio Italia, and six Lambda Literary Award. Runs a personal website, as well as a research blog. Also on Instagram, Facebook, LinkedIn, YouTube, and Twitter.
%d bloggers like this: