A friend just sent me this link to a Discovery News article on the recent excavation of a royal Anglo-Saxon grave. I’d read about it a few months elsewhere (thanks to links provided by a variety of blogs, for example Carla Naylund Historical Fiction) and this article wouldn’t rate a mention but for its truly appalling inaccuracies. It’s really, really bad. Either the reporter is misquoting Stephen Sherlock, or Sherlock is ignorant (or letting his publicity-seeking gene warp his judgement), or the editor had a total brain cramp and made stuff up. The article speculates that the ‘stridently pagan’ grave at the centre of the dig is of a royal woman, probably because of the truly striking jewellery found:

The reporter goes on to say that Sherlock believes the most ‘likely suspects’ for the identity of this well-provided-for body are ‘Ethelburga, the wife of King Edwin,’ or ‘Eanflaed, the wife of King Oswiu,’ or ‘Oswiu’s daughter, Aelflaed’.

I saw red. For one thing, if Bede is to believed, all three royal women were securely Christian. For another, Æthelburh is assumed to be buried in Kent, and Eanflæd and Ælfflæd at Whitby, where they were co-abbesses. Another leap, involves ‘iron age coins’: 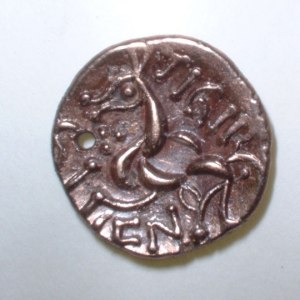 These are said to be pierced ‘to hang as if they were crucifixes’ and therefore suggest ‘at least one member of the [buried] group was interested in Christianity’. Since when is a piece of coin jewellery anything like a crucifix? This is a very, very sad piece of journalism.

So now I’m wondering, what’s the worst bit of medieval sensationalism you have seen?

2 thoughts on “I am appalled”