** As always, if you don’t know the history of the time, this could be a big spoiler for you, so if you’d rather not have any hints about upcoming events in Hild’s world, don’t read this **

England and Wales in Hild’s time. (Highlighted area in more detail below.) By Hel-hama (Own work) [CC BY-SA 3.0 (http://creativecommons.org/licenses/by-sa/3.0)%5D, via Wikimedia Commons

Britain looked different in Hild’s time. Take a look at the above map and note the pale green areas that were swamp and/or alluvial plains and/or sea. Most have long since been drained and filled and turned into rich agricultural land. But 1400 years ago they could be under water year round, flooded twice a day with the tide, or submerged for months over winter, depending.

Now look at the vast mire between Deira and Lindsey. This, according to Bede, is where the battle of Hatfield Chase1, or Hæðfeld, was fought in 632. It was the final conflict between, on one side, Edwin, king of Northumbria and overking of the Angles, and, on the other, Penda of Mercia and Cadwallon of Gwynedd. Edwin and his son, Osfrith, were killed; another son, Eadfrith, was captured (and killed later). For a while, until Oswald fought and killed Cadwallon at Heavenfield, or Hefenfelth, Northumbria reverted to its constituent kingdoms of Bernicia and Deira

If you add roads and key settlements to a more detailed version of south-west Deira (what is essentially West and South Yorkshire now), you get this:

I haven’t got around to fully annotating this map yet. What you’re seeing is, in blue, the river systems, including the Humber (which becomes the Ouse upstream). The red dots are, from north to south, York, Tadcaster/Cælcacæstir, Caer Loid (the chief vill of Elmet), and Caer Daun (present-day Doncaster). The dark lines are Roman roads (some in much better shape than others, more on which another time). The brown bits are anything over 800′. The tiny green line is Becca Banks, Aberford. This map isn’t massively accurate. The highlighted square, though, reproduced below, has much more detail and those details are as accurate as I could make it. 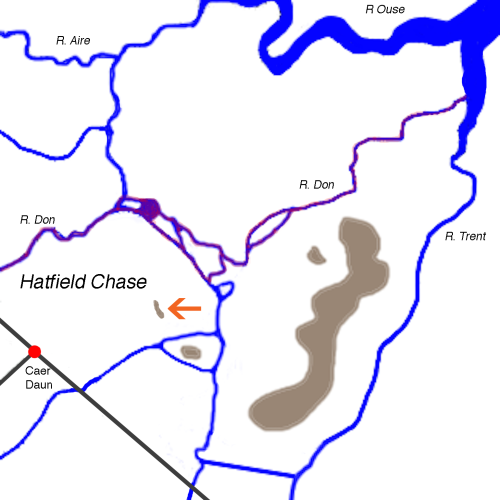 Hatfield Chase and Axholme circa 632

632 CE, though, was almost a millennium before Vermuyden’s massive drainage project in the late 16th and early 17th centuries which reset many watercourses. There’s a lot we don’t know (or at least I don’t; I couldn’t find easy-accessible data). I had a go, anyway. I worked out the waterways and contours using a 17th C Dutch map, an article by Joan Thirsk from the ’60s, a 19th C antiquarian’s musings about Elmet, and an article whose antecedents I have disgracefully lost track of—old, judging by the hand-drawn maps—which I downloaded long, long ago on a platform far, far away; its meta-data did not travel with it.2 As you can see, the River Don (highlighted in purple) once flowed into the Trent rather than directly into the Ouse at Goole. This puts a radically different complexion on the landscape.

I haven’t got around to fully annotating this map either. The road Penda and Cadwallon and their army would most likely have used (that part of the alternate Ermine Street generally known as the Roman Rig) ran to the west and is just visible in the bottom left corner, along with Doncaster/Caer Daun. On this detail, I’ve highlighted areas 75′ or more over sea level. I did a lot of work, but extrapolation and research will only take you so far; at some point I just had to guess. That suspiciously straight blue line connecting the Trent and the Idle is a Roman ditch, or canal. That splotch northeast of Caer Daun, with the orange arrow pointing to it, is the only raised area south of the Don accessible from the road without having to wade a formidable water course such as the Torne or Idle. It’s on Hatfield Chase.

Bede tells us Penda, or perhaps Cadwallon, killed Edwin. I assume on the battlefield. I assume, too, that this was an execution, one designed to make a statement and cut the heart from Northumbrian resistance. If that’s the case then the execution had to be visible to both armies. If that was so, then this is where it happened. That little rise is where Edwin lost his head—and perhaps arms and hands. But perhaps there was only time for his head. Penda and Cadwallon were probably in a hurry to storm north and subdue the rest of the country. (That’s what I would have done, anyway.) In which case the next point of Yffing resistance would have been Aberford.

I’d love to get others’ thoughts on this.

1 Where I once got stuck hitchhiking from Hull to London. But that’s another story.
2 I have since tried a reverse image search on TinEye, which obediently crawled 10.854 billion images and came up with nothing.

14 thoughts on “Hæðfeld: Where Edwin lost his head?”

Nicola Griffith is an English novelist living in Seattle. Now dual US/UK citizen. Author of Menewood (2023), Spear, Hild, So Lucky, and five other novels, plus a memoir. Two-time winner of the Washington State Book Award; winner of (among others) Nebula, Tiptree, and World Fantasy Awards, the Premio Italia, and six Lambda Literary Award. Runs a personal website, as well as a research blog. Also on Instagram, Facebook, LinkedIn, YouTube, and Twitter.
Loading Comments...
%d bloggers like this: